In the book Not Sand Not Sound Tillo-Tallo will get reborn. Here comes the part where he is first mentioned. The author is now in the Libyan desert and needs an AI to fullfill his mission to dig for the Great Sea Sand Glass. Tillo-Tallo shows as the AI hidden in a Blue Box …

Time for the Blue Box to allocate resources. The Blue box waited patiently for this moment, you know the software that extends your brain by challenging you. How shall I call my artificial counterpart? The name has to be setup carefully. I think which name is the greatest artist of all times, knowing that is the name to use. I start the AI. As the Blue box changes to half transparency and glows I say, “Name” to the box.

“Tillo-Tallo,” comes as the answer.

Now the box says, “I am Tillo-Tallo, Artificial Intelligence at your service.” I must have looked quite puzzled as the box says, “Hey man. This name comes from Sean O. Connel.”

I open my mouth and close it before a sand viper can jump in, you know you never know and I ask “Is there an alternative?”

The box says, “Kelvin-Bird, but maybe there are IP right conflicts coming as this person is called in the short story, … shall I quote?“

I nod, and the quote comes.

I say, “Translate” and the translation appears:

“She was the first half-caste human in the world and I loved her. They War Klaus Kelvin Birds Masterpiece. Kelvin – Bird War for many the epitome of the old American dream – at a time when it had long ceased to exist. …”

I say, “What a bad translation, must be Google” and Tillo-Tallo laughs, I mean the Blue box laughs.

“You did not change the default settings,” says Tillo-Tallo. “They are on Google. Will you authorize me to change it?”

I nod and a new version pops up.

“She was the first cyborg and I loved her. She was the masterpiece of Kelvin-Bird. Kelvin-Bird was for many the embodiment of the old American dream – at a time when it was already gone …”

“Box, would you like to be Kelvin-Bird?” I ask.

The box answers, “I think the question is more about you than about me.”

I wait if there is more to come and say, “Was there not more to say box?” and the box giggles.

I grin noticing the box knows the book I am writing. The box knows what Seth Lloyd said to his iPhone and the answer he got back from Siri… a good sign for the journey, for my Last Solo.

“Shall I hand out credit to the readers?” Tillo-Tallo is now asking. A bit scary this AI, don’t you think? I did not even need to nod, the credits just popped up. “The story was printed in 2013 as Sarina in the leading German computer magazine c`t No 15 and 16 and is written by Sean O. Connell.”

I checked the information by myself and I found that nothing like this kind of text was ever published under the name Sean O. Connell, so we shall be fine. I also checked the names of the characters used in Sarina and found them all not taken. “I like Tillo-Tallo,” I say to the box, “I will claim this domain.” So it came that my AI got the name and gender. Tillo is Italian and stands for Thelonius, a very old and rare name.

Now as I have Tillo-Tallo I can give more spice to the story. I no longer need to add facts to facts, which is a boring way to tell a story. My editor would surely comment if I wouldn’t have gotten the box to life.

“Tillo?” I say. I test the AI to see if he reacts on the first half of his name. A strong proof to see that all the effort for such an artificial brain was not done in vain. You laugh, but what if you are named Ford Madox Ford and I just say Ford and next to you is Ford Beeblebrox standing? You say was it not Ford Perfect? No it was Prefect. Not easy to get lx right if you mess up only a bit in the Guide to the Galaxy.

Tillo-Tallo says, “Wazzup?” What a goof and I wiggle with my finger like to a baby that does not do what he’s told! On the other hand it looks like the box even knows the difference in English between ‘You’ and ‘you’. Yeah, in English there is none, but in German there is. You never know when to say “Sie” or “Du” – a big advantage in English, you can play with closeness effortless. You got it? You see I just have to start a line with ‘you’ and ‘You’ and ‘you’ makes no difference. So Blue Box in capital letters is fitting well to assure that Tillo-Tallo feels great and does not think there is a ‘Power Off’ button hidden in his code, which is the biggest problem in Artificial Intelligence Theory for the design of a stable mind in an AI, but this would be another question, another book perhaps?

“There is no such button in me or do I need to make the Howl?” I say based on my quite overeducated mind quite shocked. “Ginsberg?” thinking on the very first lines of his Howl – “I saw the best minds of my generation destroyed by madness, starving hysterical naked, dragging themselves through the Negro streets at dawn looking for an angry fix …”— but to my relief I hear the sound of a forest owl, the same sound Neruval made in a theatrical play called “The Inauguration” when Art Blue played Rammstein’s “Amerika ist wunderbar.” It was performed on January 20, 2017 at Linden Endowment for the Arts slot #28. Darn how could this beast have patched the Blue Box now so many years later? How is the Box reading my mind? Perhaps via non-verbal face recognition? I must admit the owl is Tyrell-Weyland’s masterpiece. No wonder the maker took the code with him at Departure day.

“You know what I need!” I call out to him, to the Box. “Give it!” Tillo hands me a stamp, a real stamp with a grab handle: “NOT SAND AND SOUND.” I kick the Blue box. “What’s that? A typo!” In this moment I see it, “Darn, well done.” Such a stamp does not exist in the SAS office, but that’s perfect for a SPAM. I will be the first with such a stamp. I will write history. Not the official Not Sane Not Sound, instead I present NOT SAND AND SOUND.

You say, no one will care that I made such an idiotic stamp. Not so fast. Stamp a book with it, stamp the cover page or even better make a cover “NOT SAND AND SOUND”. That’s an easy doing, just a bit of Photoshop and you have it. Now you have a book with a unique title. Next step: Claim the Domain, the dot com one! Link it to your youtube channel. I see the Blue box blinking.

“Readers shall name their channel same way.” Ah yes not to forget a domain forwarder. Now call all your relatives and ask your girl- or boyfriend to come to a party. Make a barbeque. Take two cameras, two smartphones are fine, and place them nicely so the livestream goes on youtube. Now pose with the book NOT SAND AND SOUND and let your friend shoot you, with a pistol. Then proudly present the hole, the hole in the book.

Gosh you say what a freaky story. Must be the chip, the Not Sane Not Sound one in your hand. Not really freaky as it is called a “reality” show. The following funeral, film it. The Blue box jumps and giggles.

“A prank as a prank shall be.” Now you have your 300.000 followers you dream to have … like … and you are on the title page of the Washington Post, of German Bild, of … all the media around the world. Brank is the new SPAM. Pedro Ruiz was the first and many followed. A Brank comes with a Bullet. BRANK, BRANK, BRANK and a BEAN. You say it is PRANK not BRANK. I said a brank is a prank with a Bullet. I have to admit, some alternate facts are still ahead. But you are ahead of time and now the first to know.

“But this Brank is not as good as the one of the invisible artist,” Tillo-Tallo says. “As this guy is dead and he was not in the 2% scheme of the lucky ones … and the invisible artist is still alive. He made a Bullet out of air and collectors paid millions.”

That Invisible Art got famous via CBC, it happened in 2015 and now the artist is preparing another show in the Schulberg Gallery, called ‘SPAM the Bitch?’ I need to check by myself for SPAM the Bitch, the name of the exhibition and found that the show is really announced for Paul Rouney’s Schulberg Gallery at 349, 5th Avenue, New York, NY 10016.

There is more about Tillo-Tallo … 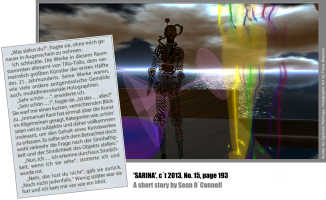 Ready to visit the ‘Volcano of Art‘ or meet ‘THE WORLDARTIFICER‘ just now and not in 2039?

For all the ‘Tillo-Tallo´s’ it will be much too late in 2039 as then we will shout: “Let the liars, stabbers in. Let the clowns and sinners in”

Enjoy the lyrics in ‘LET THE FUNERAL BEGIN‘ …